All little girls brag about their fathers, but mine really does have the best garden . Everybody says so.

He draws up a new plan every year on graph paper on the same old clipboard. He keeps all the plans in reverse order on it. There’s over 40 years of plans on that thing, with no two alike.

He gets the same neighbor to plow the garden plot with his tractor every spring. Daddy picks the date carefully.  He has all his plants ready to be put in as soon as the ground is broken.  He travels to the best sources to get his seedlings and seeds.  He buys extra plants to share with other gardeners.  I have too many of these, he says.  Do you need some?

From the moment those little plants are carefully placed in the ground, they are tended  numerous times each day. The tomatoes are suckered, the beans are tied up, the okra is thinned, the soaker-hose is turned on and off, on and off , like the timed feedings of  infants.

People from all around come to help with the garden.  They know there will be baskets of produce delivered to their doors later in the season.  Daddy has to supervise the help.  Things must be done a certain way, you see.

Mama and daddy even take produce to church and pass it out after the service from their trunk.  Once when they were taking vegetables to their mountain friends, daddy shared some tomatoes with a person in the parking lot. A line formed behind the truck. They thought he was selling those perfect tomatoes. He gave some out to the hungry strangers.

Daddy complained this morning that the squirrels were chewing on the picnic table.  This was the “Lunch Bunch” table,  where all the neighborhood men gathered each Wednesday in July for tomato sandwiches.  Most of these men are in the ground now, but my daddy is still in his garden. That table sits empty , except for the squirrels.  I told him that they were just gnawing on the greasy, salty drippings from all those tomato sandwiches. Who can blame them?

Not just the squirrels are busy out back.  Mama and daddy buzz around that plot parenting those plants like they are newborn babies.  Those things don’t have any choice but to stand up, grow strong and produce.  With all that love, how can you not?   Right sister?

Let the flowers come to the funeral.

We mourners need to see their up-turned, shining faces.

While our heads are bowed out of respect and sadness.

We need them to brighten this darkness.

We need their ribbons and tags.

So that we can read the names of the people moved by his passing.

We need roses and mums, lilies and glads

to add scent to the hushed air.

Let them line up at the altar and surround the tent.

In lieu of chicken and biscuits,

In lieu of casseroles and pound cakes,

In lieu of a check to the church,

SEND IN THE FLOWERS.

To stand like sentries over the plot after the mourners leave,

In memory of my precious cousin Mark Bayzik, who died yesterday.

I went into my neighbors houses while they were away and took pictures. I  knocked at the door and if no one answered, I went in with my camera to check out their housekeeping and furnishings.

At one house, some babies were home alone.  I took their pictures while they were sleeping.

Once the lady of the house ignored my knocking and was inside when I opened her door.  It was quite a shock for us both, but she let me take her picture without a fuss.

Here is Mrs. Chickadee stuck at home incubating those eggs.

She was probably glad for my company.

That fluffy stuff is fur from my New Zealand rabbit named Barley. How cozy? I love her colors. 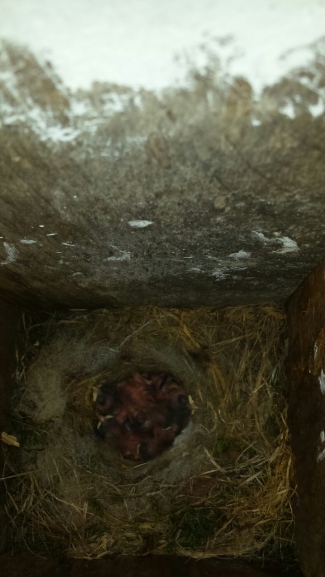 Here are the babies that were left home alone.

I don’t get this free-range parenting.

I’m a helicopter mom, like my mother before me.

I saw Mrs. Wren leave, so I took the opportunity to check out her decor.

Then I dropped by the Bluebirds’ house and…

What’s this? Darn cowbird. You brood parasite! You need to mooooove on.

All three nests were in birdhouses  connected to the deck on my home. They are the standard bluebird type houses.

The Carolina Wren usually lays 5 brown-spotted, whitish eggs in a domed nest.  It looks like a bassinet made of twigs and grass.

The Brown-headed Cowbird (not really pictured)lays one white speckled egg at a time in the nests of other, usually smaller songbirds.   The foster chick grows more quickly than the biological offspring of the nest owner.   The cowbird chick out-competes the smaller chicks for food and sometimes  pushes his “siblings” out of the nest.

If you hear a squeaky, rattling gurgle-like sound, look  around.  If you see two strangers and one is in all black with a brown hood, alert your neighbors to the possibility of an impending invasion.

NO, not me with my camera.    I was referring to the cowbirds.

No, this is not going to be a rant against Monsanto.  I won’t even go there.

I am sharing my methods for saving seeds of annuals, biennials and perennials.

I do this to have more plants, keep “heirloom” plants going, share seeds, and avoid buying annuals’ seeds every year.

I will demonstrate with some poppies that were given to me by a dear, artist friend, Bill Troutman.

He is no longer around, but every spring these poppies take my breath away with their beauty.

Once the pods are brown, the holes around the crown will open. Shake some seeds out onto a piece of paper with the name of the flower written on it. This labels the inside of the seed packet.  I do this to avoid that “What is This?” issue if I forget to write the name on the outside of the folded paper.

I do this on a box lid to avoid losing seeds in the process. I have multiple sheets of paper in it, so I can walk around the yard collecting different seeds at the same time. It’s also handy for carrying the roll of tape and the marker.

Then fold up the paper and tape it up. Then write the name again on the outside.

I sow these poppy seeds in November.

Some other seeds I save in June are foxglove and columbine.

Years ago my little niece came to me with a fund-raiser catalog for her school. I was pleased to find bulbs offered among the usual nuts and wrapping paper. I ordered a packet of five pink “Fairy Lily” bulbs. The scientific name is Zephyranthus robustus.  It’s nickname is rain lily.

I planted these in a pot that had some extra space and forgot about them. Later, I noticed little green shoots. Then one day some sweet little pink faces were peeking out.  When the central plant finally out-grew that pot, I divided the bulbs and put them in many more pots with space in them and even planted some in the yard.

The fairy lilies tend to bloom after it rains.  I am surprised to see some blooming in different spots at different times.  The blooming periods are unpredictable, so it’s like getting a little surprise from my niece whenever more bloom. I smile every time I find some blooming and remember my little pink fairy niece.

You know you are getting old when you plant things yourself and then are surprised to see them later.

White flowers pop in shady spots. They never clash with other colors. They even show up at night.

Here are some of my favorites.

A quick walk around the yard with my camera to capture all my little friends in the garden.

I almost stepped on Mr. Snake while looking at clouds.  My daughter calls him “Big Guy.” He showed up at one of our parties. We had to stand in front of him as my sister-in-law passed.  I hope she doesn’t read this!

We have lizards everywhere. I suspect some arrived in bales of pine needles.  We have had baby snakes come that way also.

The tree frog on the rocks is named Mortimer. He used to stay near our front porch at a little patio pond. He has now moved onto the porch behind a piece of art.  He peeks out as we go and come. You will see him in future posts. 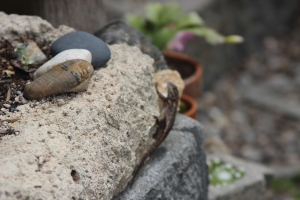 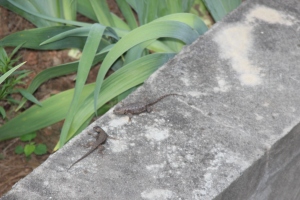 I wish this picture of the frog at my daughter’s pond did this frog justice.  He is bigger than my hand and makes a big SPLASH as he jumps into the pond.

Just because you aren’t out enjoying your garden at night, does not mean it is empty.

Here are some of our neighbors who prefer the darkness.

Some silently creep along the ground, some climb trees leaving a shiny trail behind, while others are loudly calling their friends to come to a pond party. 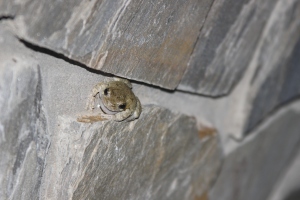