My son dug his own fish pond under his bedroom window years ago.

He is a man now, living elsewhere.  His pond, of course, is still here.

There is always something going on in it during the warm months.

“Too Many Toads” occurred in it.

There were new eggs.  I held them up for this photo. 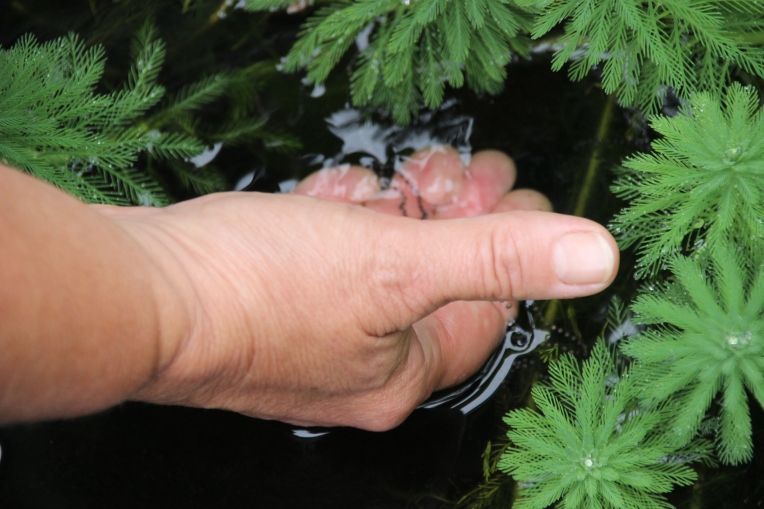 Black top with white bottom is called countershading, a form of aquatic camouflage.

When I put them back. They rolled over to white side up, which is upside down. Now the fish can see them from below and other predators can spot them from above.  I hope this did not lead to their disappearance. 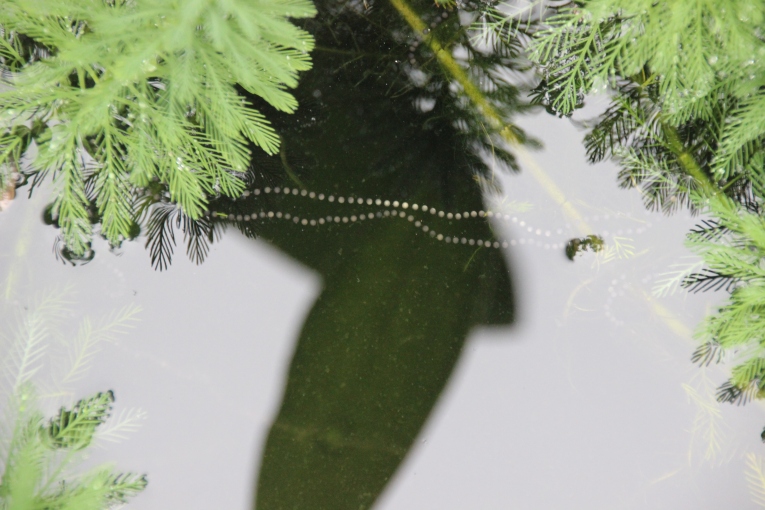 The Parrot Feather actually closes in the evenings.

Some tadpoles survived from the last batch of eggs.

Don’t throw away these holiday flowers.

Save the Amaryllis/Hippeastrum bulbs until spring.

Plant them outside in a sunny location with good drainage.

Add compost to the hole and plant with the shoulders showing.

They will bloom in May or June.

Multiple stems with many flowers will show off for several weeks.

Then cut the stems and leave the foliage.

They will come back every year with more blooms.

I do add a layer of mulch in late fall in case we have a cold winter here in Zone 7.

These are scattered around my gardens to fill in

while waiting for the daylilies to take center stage in June.

You can rescue them for 1/2 price or less in January.

Every year, I add a new Amaryllis outside.

During the few sunny minutes yesterday,

I took pictures and planted some dahlias that I had started in pots.

Everything is wet here in North Carolina.

At least we do live high on a hill, so no flooding worries for our house.

So while we are inside again today. Here are some sunny pictures from yesterday.

My memorial day photo is first.  A red Asiatic lily with a blue dragon fly.

I also include my favorite little Asiatic from my daughter’s  lily garden below. 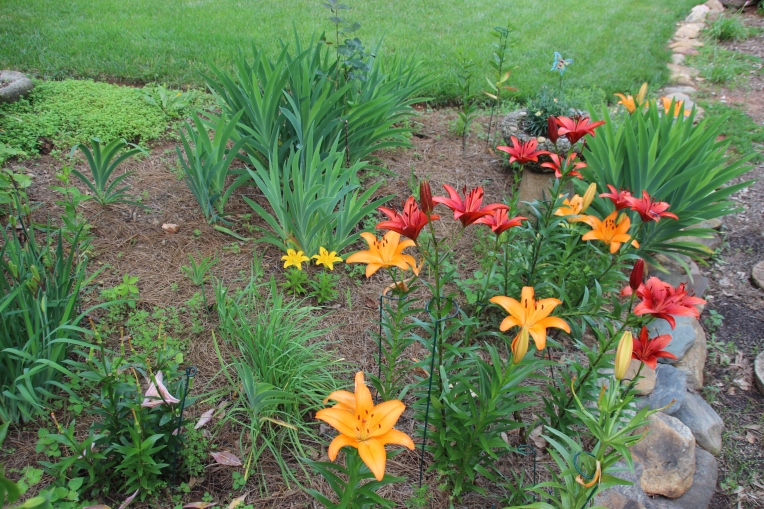 It’s the tiny two in the middle. Named ‘Tiny Bee.’

More slime mold showed up in the bunny yard.

I see why the slime mold, Fuligo septic, is nicknamed “dog vomit.”  If I had a dog, I’d be taking him to the vet after finding this.  Mold and mushrooms are everywhere! 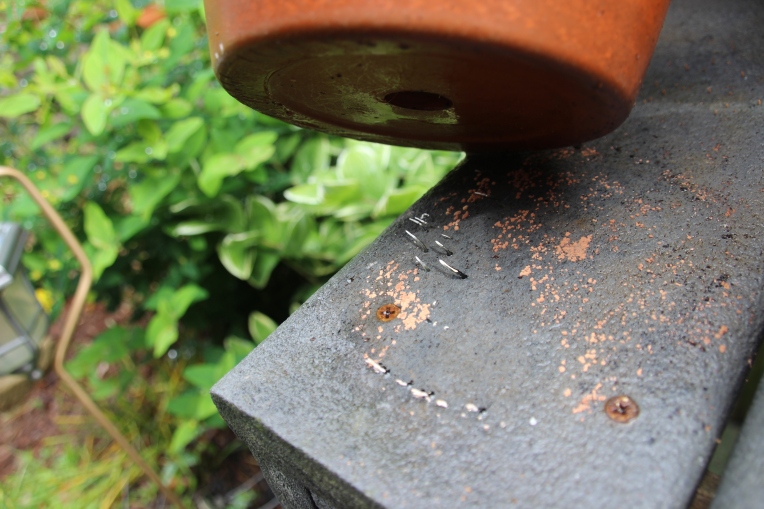 I have been cleaning my workshop during these many days of rain.

Do not expect a photo. I am ashamed of its neglect and nastiness.

You may have noticed my latest posts are a little mushy.

Oh my. It has caught me at a bad part of my maintenance cycle.

I did get some weeding done, but ran out of mulch.

I am amazed how much growth has occurred this week.

I wish I had placed measuring sticks by each Hosta.

There are some upsides to the downpours.

I found some perfect animals tracks in the mud.

and then there are the mushrooms.

after washing them.( Attention: Shrub Queen)

These are Backdoor Shoes.   I will let you know how they hold up.

Here is the second daylily to bloom. Dixie Boy.

When some serious snooping is needed, it may be necessary to hire PI.

No, not a Private Investigator, I mean a Super Hero.

She was here almost immediately to investigate the strange mushrooms.

She valiantly removed them from the nook in the fairy tree.

The she did a quick analysis to determine their toxicity.

They weren’t poisonous at all.  Actually, they were quite delicious.

PI then tracked down the Garden Ghoul.

Turns out she was checking the fairies out to see if THEY would make good neighbors.

Her name is Wingrid.  She hopes to move into Fernland under the fig tree.

Poison Ivy and Wingrid spent the rest of the afternoon sitting on the stump discussing mushroom growing and sauteing methods.  They both use coconut oil.

Let this be a lesson to all of us.

Just because someone has extra arms, blue skin and no underpants, doesn’t mean they won’t make a good neighbor.

Welcome to the neighborhood Wingrid.

(But children, you still need to lock the door, wear clean underwear and not eat wild mushrooms.)

It is a pesky tiny piece that I immediately lost in the yard and had to go back and search for. 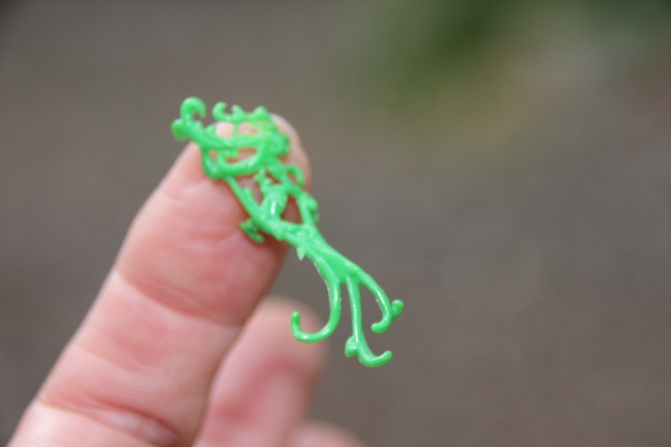 This should be another tiny piece for the “magic box.”

All her joints seem to be ball-and-socket, so she is very pose-able. I am not sure how these tiny joints will hold up with much use. Also, her skirt makes it impossible for her to sit down. (Reality!)  I had to roll it up out of the way for the sitting pose. At least she had on undies.

I spotted it early this morning,

hiding up against one of the deck posts.

I kept an eye on it all day.

By afternoon it had slithered around the side of the pole.

It left prints wherever it went.

I hope it leaves soon.

I’m not really scared of the thing.

I am pretty sure we can outrun it.

My neighbor told me about this.

I thought things were amiss. 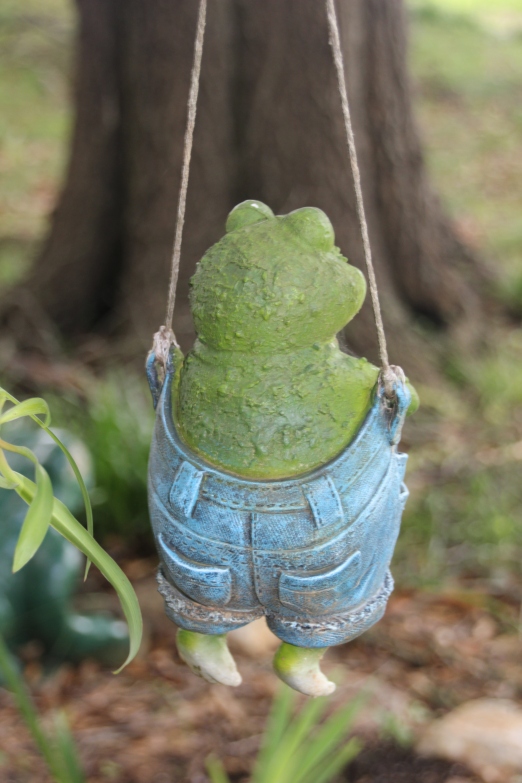 So I walked down to see,

about the three chickadee.

It turns out, by chance

he had a hole in his pants. 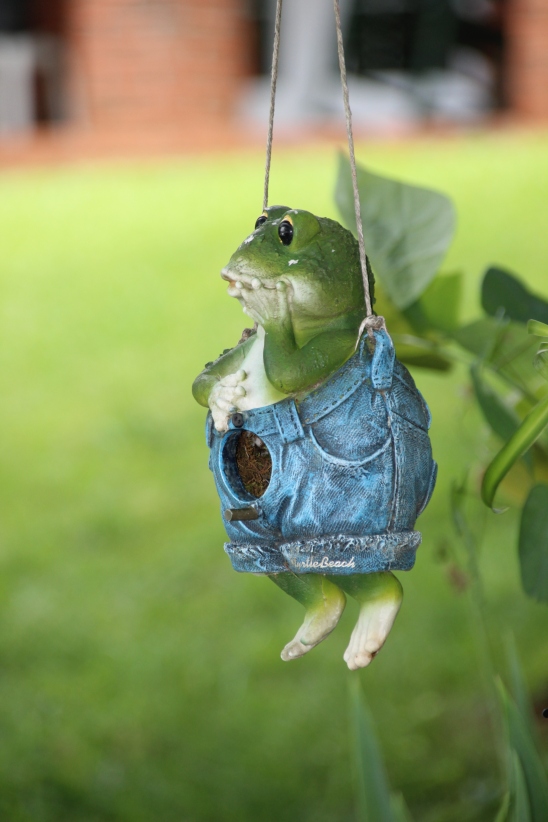 The mama went in to rest

and then built a nest.

Two babies they made.

We all think it’s sweet

I know I should not complain about the rain.

After all it does bring out the Rainlilies.

Another name for these is Fairy lily/ Zephyranthus robustus.

My daughters lily garden is starting to show blooms and buds are blushing.

A new daylily, Moonlit Masquerade is the first to bloom this year.

Its my shoes that are the problem. This North Carolina red clay sticks to everything.

I have run out of dry shoes. My shoe basket by the door is full. 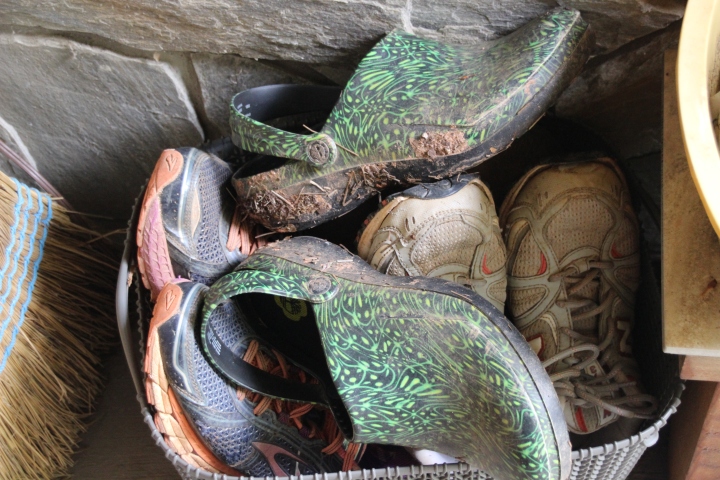 I may be forced to go shoe-shopping. Poor me.

Foxgloves/Digitalis purpurea are a biennial plants.

That means that they grow one season and bloom the next.

They reseed themselves, so I have some blooming every year.

Because they reseed/self-sow, they tend to move a little way from the original plant

and they change colors.

(If you save the seeds, let them dry and sow them during the fall in partial shade.)

There are three different genes that determine the amount and location of pigments.

A recessive form of the pink gene (m) leads to no pink/white.

So when a white mixes with other colors of foxglove, white tends to disappear.

The pinks are blooming full now.

I do have one with a white top. I don’t know how to explain this one genetically.

There are no whites in my gardens this year.

I usually try to keep whites by purchasing one every few years.

Instead,  I acquired a lovely peachy type this year named, Dalmation.

Its label says perennial, so I don’t have much confidence in its name either.

It’s a nice companion to an unnamed verbascum/mullein which I obtained last year.

I will see how its genes fit into the mix.

I expect this glove to change, too.