The low angle of the sun’s rays causes the subject  to cast vertical shadows on itself.

It gives a three-dimensional effect that you can’t get any other time of day.

I got up early this morning and let the sun’s rays spotlight what I should photograph.

I paced up and down the eastern side of the garden waiting to see what lit up next.

It was like being lead on a treasure hunt.

Look closely for rays and shadows.

Let the light guide you.

Why do we use the color red to signal stop?

Red has longest wavelengths we can perceive with our eyes.

We can’t see these longer waves, but can we sense them?

I often wonder if we can feel red somehow.

When it is mixed with other colors it demands our attention.

When it’s bright and big it makes us pause.

What does red light beaming at us feel like subconsciously? 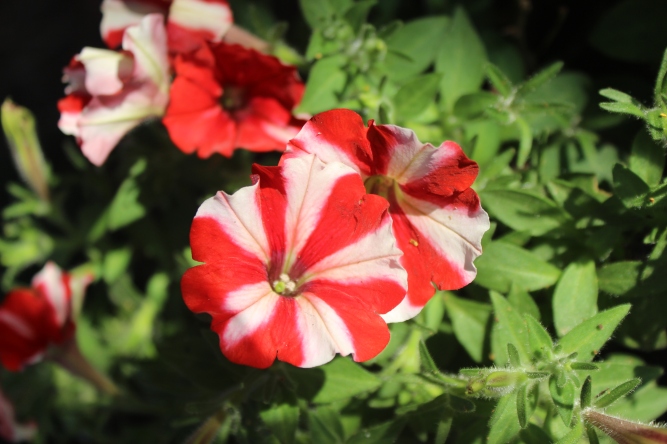 Why does it universally mean stop?

Do we all have an ancient memory of blood red danger?

Does red make some of us blush and make others feel angry?

How does red make us feel?

If you want tiny friends, you must move slowly and quietly.

Remember you are a giant and they are fairies and elves.

I am out and about so often that many of my tiny friends ignore me.

I think this is rude, because I always speak to them.

My friends may have fur, feathers, scales or an exoskeleton.

They may have two, four, six or eight legs.

Some even have wings.

I am always glad to see them and they make me smile.

That means they are my friends.

Vines are amazing the way they use support from their surroundings to get where they want to go. They will grow up a trellis or a tree, a fence or some furniture, whatever is available to serve as a bridge to the sunshine. Growing toward the sun is termed phototropism.  More sunshine means more photosynthesis which means more food.

Other types of plants have to support themselves as they rise, but not the vines. All they need is a crafty way of growing that enables them to attach themselves to surrounding structures. Plant growth in response to touch is termed thigmotropism. Vines use this to grow in response to touching things that might serve as a support.

Vines use different ways of attachment. Some actually twine the whole growing end of the stem around a nearby, taller structure or plant. Wisteria does this. (I have a wisteria story I’ll save for a later post.) Morning glories do this also. Morning glories are very ambitious in their growth. The vine seems to reach for the sky and count on something to catch it. Maybe that optimism is why they are so successful.

Cardinal Climber does this.  It swings it’s little vine arms in the breeze hoping to catch a hold on something.

Hummingbird/Cypress Vine does this, too.  It almost makes me sad when it outgrows the lamppost. They little vines viciously wrap around each other trying to stay up.

There are vines with their own little swirling tendrils. These often grow out straight until they touch something and then curl around it like a tiny pig’s tail. My peas do this daintily.  I wouldn’t count on much support from a picky pea tendril.

Some plants have special little leafstalks in charge of supporting the rest of the plant. Clematis does this. Mine has been pitiful this year, but hopefully there is enough there to get a picture of this.  Maybe my particular clematis had some lazy leafstalks that refused to support the rest of their vine?

Another way vines borrow support from their surroundings is through holdfasts or rootlets that actually dig into the structure. Holdfasts are special little disks that glue themslves to the structures. (not pictured)

I had English ivy (Hedera helix) that dug its little, brown, hairy, rootlets into the bark on the trunk of a tall, old pine once. When I tried to remove it, it pulled the bark off the tree.  One of my gardening mantras is, “Never ever plant ivy.”   Don’t bother to argue with me on this. It took me months of pulling and cutting in snakechaps to get rid of that viscious vine.

As you can see, I have many vines growing in my garden.They don’t get growing until it gets warmer in the summer. I try to train them up onto the fences and trellises early. By August, they are tall and strong and need some cutting back.

We have a structure that used to be the children’s playhouse. Now, it’s my Vine House. This year it was supposed to be covered with Cardinal Climber on the front, Moonflower on the side, and Climbing Okra up the back.  The Moonflowers have not shown their faces yet and the Morning Glories invited themselves, as usual.

The Parade has Ended.

The first in line was Whooperee on May 30,2015.  The last to bloom was Sabre’ Salina on August 12, 2015. The parade of blooms lasted 72 days. I enjoyed every single morning of walking around with my camera.

I must admit I missed some bloomers due to a week of back pain and a week of vacation. I also left out the spiders. I omitted the six or seven that don’t have names, except for the yellow giant(pictured with Santa). that one was to big to ignore.

I have many daylilies because my best friend used to have a beautiful daylily farm.  They gave me many of these. (Thanks Joyce and Jimmy.)

How do I remember all the names?  My little secret is etching the names onto colored plastic knives from any party store.  I use a Dremel tool, that way the names don’t fade away like when you write…

Years ago some friends at church, the Howards,  gave me a bag of seeds. They called them Climbing Okra seeds, but the seeds were black and shaped like small watermelon seeds. I asked them later if I had been given the wrong bag. They assured me that they had shared the intended seeds.

I planted them and was amazed at the vines that grew all over our trellis. There were lovely, glowing, yellow flowers that opened in the evening and fruit that did look and cook like okra.

So what is this mysterious vine of mine?

It is Luffa acutangula. Also know as Chinese okra or edible gourd.  It is kin to the cucumber. It’s yellow blossoms open in the afternoon. They seem to glow as the sun goes down.

There are separate male and female flowers. These are pollinated by moths and possibly ants. I have photos of both, busily moving from flower to flower.

Each joint of the vine has one leaf, one tendril to grab and climb, one small cluster of male flowers and one female flower on its own stalk.

The fruit gets long in a hurry. Last year, I was surprised by foot-long “okra” hiding among the foilage.

I look forward to picking a batch and frying them up in cornmeal.

In the meantime, I’ll enjoy the glowing flowers with the moths and ants.

My children spotted this little guy while they were fishing one evening last week. We grabbed the camera and the bird book. We thought it was an immature night heron, until we read the article in the Charlotte Observer by Taylor Piephoff.

If it was a limpkin, it came from Florida.  We knew we had not seen this bird before, but did not know this was possibly a rare event. Jacob and I are still comparing photos of both. Some of the markings look more like a night heron.

Jacob got these great photos. The bird was eating crayfish from the rocks of our seawall.

If you want to read more about our birds in the piedmonyt of North Carolina, Taylor Piephoff has a blog, piedmontbirding.blogspot.com.

I lost this week’s post in cyber-space. I am new to this blogging and sometimes I click in the wrong spot and lose things that I do want or add things that I don’t want. It’s not so easy, all this typing and clicking.

My post was a question, but I have answered it myself now.

Two days have gone by.  I have seen a doctor and been given a big ugly boot to wear.

I have visited my precious, “produce-sharing” parents.  I have spent the night with my sister.

We spent the past two days taking care of a tree. Not just any tree, Mark’s tree. Our cousin who left us.

We spent the first day gently removing it from its pot and inspecting its roots. We measured for a new pot and trimmed out its dead twigs.

The next day we drove to many places to find the right pot and new soil.

Then we carefully teased out some of its roots and re-potted it.

My mother arrived in time to advise on its location and position in the natural area behind Rachel’s house.

Plants are not just plants. They are living connections between the people who share them.

I have a “Gran plant” which I have shared with many of the Dudleys.  I have a “Great Grandma Pearson Peony” which has been shared, and will continue to be shared every third year.  I have a fig tree from a dear family friend, Miss Robbie, that grows beside the reading porch to give dappled shade.

These are my living connections to these people I love(present tense), who are not here for me to touch or to talk to.

I am surrounded by living memories of the friends and family, who shared their love and love of plants with me.

Mine isn’t just a garden. It’s my life I’m standing among. My past and my future.

This sweetie just loves those sunflowers.  I see it every time I go out to water the herbs.

I finally made it outside the fence with my camera.

It was a nice pause to wait for it to land on various flowers. I need more pauses. 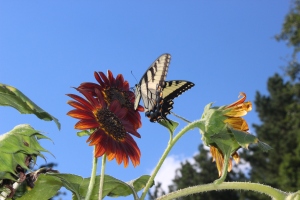