Uncle!  Tio!  Lo Zio!
You can stop twisting my arm.
I’ll tell you my Schlumbergera secrets.

First secret:
They bloom from the ends. So if you want more blooms…
You need more ends. Three to five divisions off the main branch is best.
This means purging and pruning the leggy limbs.
They will branch out and produce more ends,
which means more blooms.

Less is more. Too many branches per stem means some don’t  bloom. It’s like having too many children.  The poor mama branch can’t give them all what they need to bloom.

I try to limit my branches to from three to five divisions and total branch length to about twelve segments. Leggy is ugly on a Schlumbergera. Think of a long Christmas cactus as a tall elf. That’s just wrong!  The branches can’t support the blooms, which hang low and are harder to see.

It’s best to do this after they bloom, but I do it for folks who see it now and want it now.

Second secret:
They need to be outside during the summer in indirect sunlight.
I put some in full sun this year.
They let me know this was a mistake by wrinkling up and turning red.
A green, smooth Schlumbergera is a happy Schlumbergera.

Third secret:
Feed them every few weeks with their water.
Do not over-water. They must be dry on top to get a drink.
But remember, this is a tropical plant not a desert plant.
The term “Cacti” is misleading.
That old saying about not watering them while they are blooming is nonsense.
Just don’t get carried away with water while they are blooming,
(Don’t argue.  “Old wives tell lies”)
Not watering and feeding a blooming Schlumbergera is like not feeding a pregnant woman because she has gained weight …Don’t try that at home, men.

Fourth secret:
Give them indirect sunshine and warmth while blooming,  but no air flow.
The buds and blooms drop off if they are near a vent or doorway.
It’s the shock of temperature changes.

Surprise..There may also be two colors on one plant.  I have peach and white coming off the same branch.

Fifth  secret:
Turn, turn, turn…
They get uneven if you leave’um.

FINAL secret: Remove blooms as they wither, especially if there is a new bud beside them. 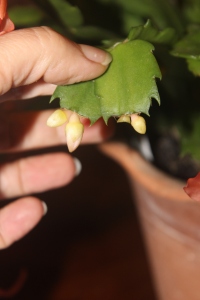 P.S. Singing to them doesn’t hurt.