In the spring on 1980, Mount Saint Helens erupted. It blew out the north side instead of the top, which left a huge swath of devastation northward and mud slides down its eastern and western slopes. The devastation and dust from this blast covered about two hundred square miles around the mountain. Millions of plants and animals were erased from the landscape.

My father went there in the early 1980s and brought back a bag of ash. This is not like wood ash that you clean from a fireplace. This is rock ash from molten rock being blown out of the earths mantle. I passed around this ash in my classrooms whenever we studied volcanoes. I wanted my students to feel the texture and weight of this ash. Since I can’t do that here,  I have photographed some under a microscope. 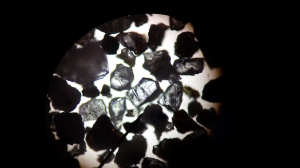 Last week, thirty five years later, I got to go see Mount Saint Helens myself for the first time. There was still evidence of the blast scattered here and there if you know what to look for.  Still some tree trunks laid like matchsticks in parallel groups. A set of taller trees that survived the blast by being on the lee side of another mountain top.

The folks who knew the place before can point out many changes in the landscape including missing lakes and valleys that were filled in by the mudslides. What I saw were green trees and blooming flowers with wildlife everywhere.

How does a place recover from such devastation? How did it change from gray ash to green forests and meadows? I must admit that people sped up the process quite a bit to control erosion and continue timber production. Trees were planted by the thousands.

Nature has its ways of recovering. Seeds are the secret. Burrowing animals pushed up soil to mix with the ash and seeds were pushed up, carried in or blown in. This with a little rain and snow started the cycle of life again in the midst of all that destruction.

Most seeds could not survive on the ash, but one type actually thrived.  Lupine, Lupinus lepidus, a pioneering species could grow on the ash mix.  The seeds of this species germinated and grew because of its low nutrient needs, due to a bacteria in its roots that converts nitrogen.

Once the Lupine took hold in an area, succession could begin.  As these plants died and decayed,  they produced organic matter for other plants to use. Thus, other plants moved into the area to produce the beautiful mix of wildflowers there today.

2 thoughts on “Ashes and Seeds: Gray to Green”